What is a thread?

A thread is a helical ridged groove wrapped around a cylinder or cone. There are both external (screws) and internal threads (nuts), which always form matching pairs.

THREAD TYPES – FUNCTIONS OF A THREAD 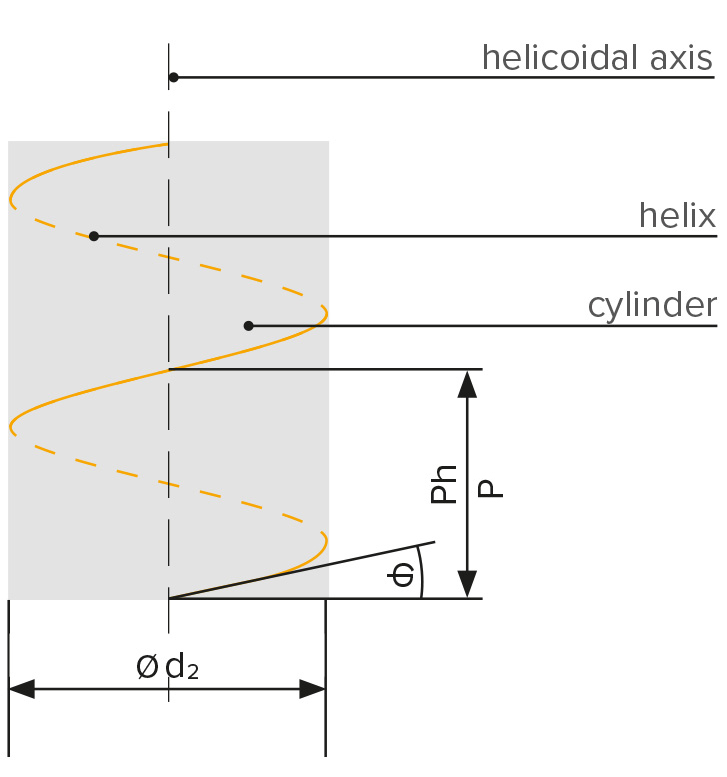 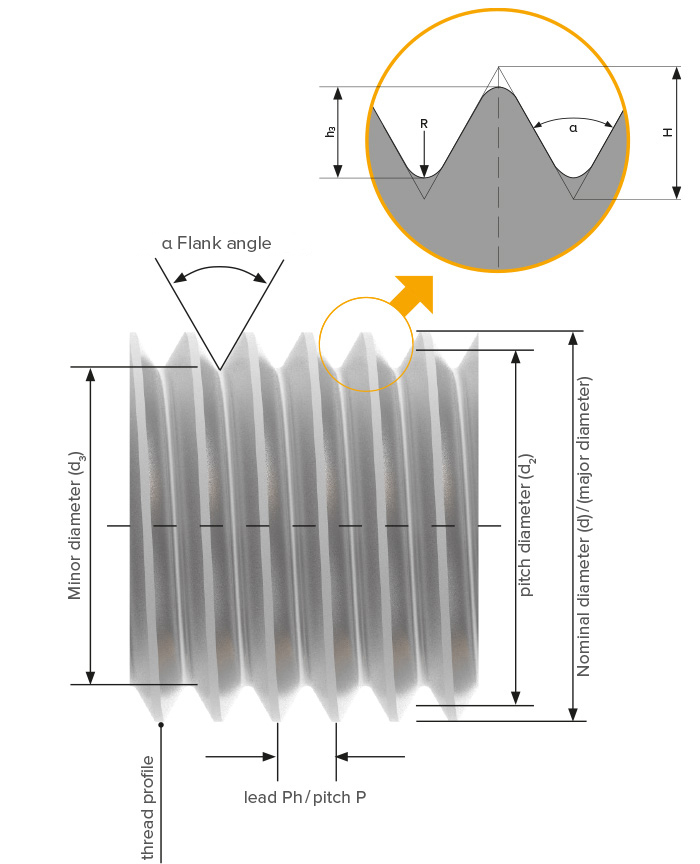 In the manufacture of threads, a distinction is made between chippless thread rolling and the machining shaping process of thread cutting.

Cut threads acquire their shape by cutting the material, whereby the original grain structure of the workpiece is not changed, but grain structure is interrupted by the cutting process. In thread rolling, the workpiece is permanently plastically deformed by cold forming. In this process, the grain structure of the work hardened material is not interrupted. The prerequisite for thread rolling is a material that is suitable for cold forming, i.e. with a minimum elongation at break percent of 5 %.

Materials
• it is possible to cut materials that cannot be cold-formed, such as grey cast iron, malleable cast iron and gunmetal

Preparation of the die blank
• precise pre-machining is not necessary

Reworking
• a machined thread can be recut at any time

Tool costs
• low, because the chasers can be reground

Strength
• higher due to work hardening of the material
• the grain structure of the material is not destroyed, resulting in a significantly higher static and dynamic strength

Workpiece geometry
• when rolling threads of thin-walled pipes, a supporting mandral may be required
• the ratio of inner diameter to thread minor diameter should be less than 0.67

FORMING OF THE THREAD PROFILE 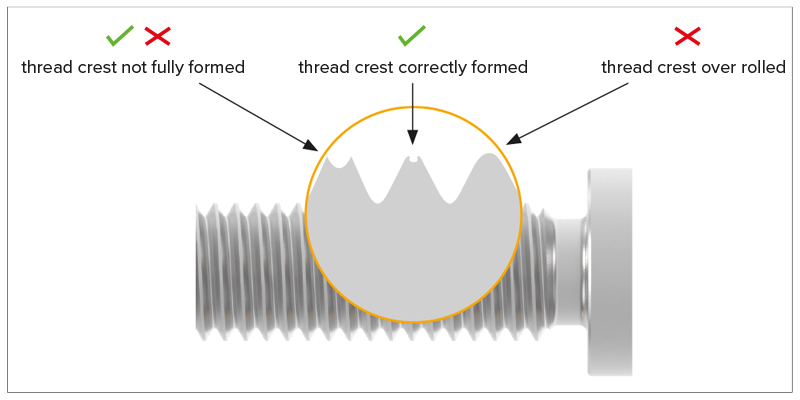 1. Thread profile not properly formed
The thread is not true to size. In some cases this degree of deformation may be sufficient for a load bearing thread.

2. Thread profile correctly formed
The radius at the tip of the thread is clearly visible. A closing fold remains in the middle and thus a thread profile is well formed. The diameter of the workpiece must be precisely pre-turned to prevent the thread crests from being overfilled.

3. Thread crest over rolled
The radius at the tip of the thread is fully closed. A closing fold is no longer visible because the rolling system was set incorrectly or the pre-turned diameter was not produced according to specification. The extent to which the thread profile is formed affects the tool life of the rolls. Over rolled thread crests can lead to roll breakage.

The material must be cold formable. For V-threads, the elongation percentage should be at least 5 %. The upper limit of the tensile strength is approximately 1700 N/mm2. Please note that the specifications are non-binding approximate values.

In order to achieve a flow of the material during the thread rolling process, the rolling speed should not be less than 30 m/min. Economical speeds are in the range of 50 to 80 m/min.

PRE-MACHINING OF THE WORKPIECE

Precise preparation of the workpiece is required:

The Chamfering:
For axial thread rolling, the workpiece must be provided with a chamfer at the beginning of the thread to allow the thread rolls to start. The chamfer angle for V-threads should be 15–20°, for trapezoidal threads 8–10°. The diameter at the beginning of the chamfer must be slightly below the thread core diameter. For axial rolling tools, different start /lead variants may be required (for more details, see chapter Axial rolling systems) 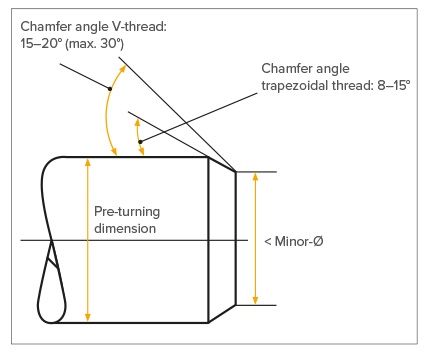 The power output depends on the rolling speed, the material, the profile shape and the thread filling degree. The power requirement can be calculated approximately using the following formula (Specifications without guarantee): 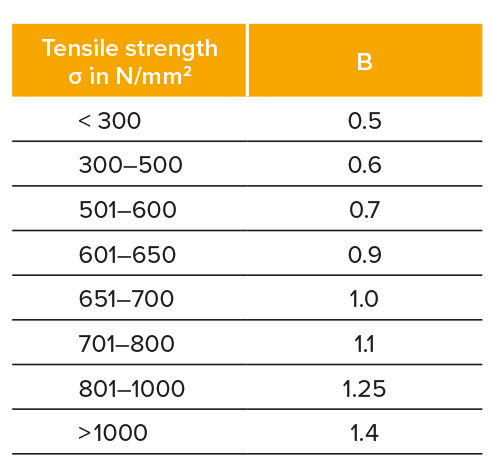 The thread rolls are set in rotation by contact with the workpiece and form the thread as the tool continues to advance. When reaching the center of the workpiece, the rapid return is initiated without dwell time. It is not necessary to open/close the tool.

Knurling is a manufacturing process for producing non-slip surfaces on cylindrical components, in which patterns are embossed into workpieces.

Basically, a distinction is made in the production of knurls between non-chipping “knurl pressing” or “knurl forming” and cutting “knurl milling”. When knurling with axial and tangential rolling systems, “knurl pressing” is used. Cold forming is used to roll the profile of the knurling roll onto the workpiece. As with thread rolling, the profile tips of the rolls are pressed into the workpiece and the displaced material flows into the gaps of the rolls, i.e. the diameter of the workpiece becomes larger.
According to DIN 82, all knurl types can be rolled, provided that the material is cold-formable.

Wagner knurling tools are suitable for demanding applications and large quantities due to their outstanding quality. We produce the various knurl forms with the pitches from 0.5 to 2 mm. 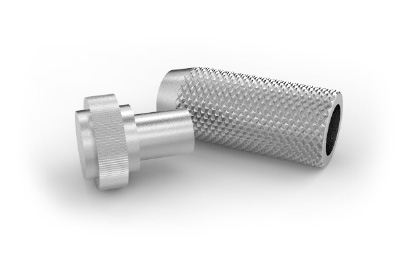 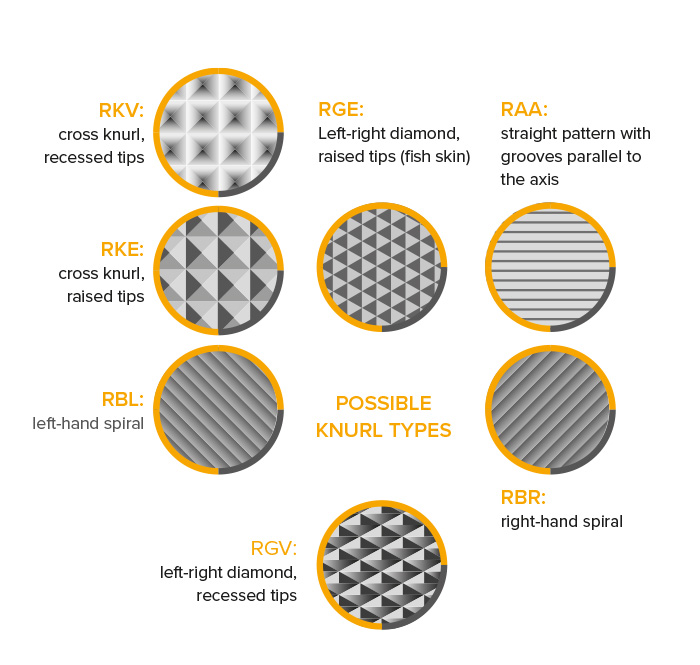 TSW-Tangential system for knurling and beading

Knurls are used to give surfaces a better grip (e.g. medical instruments), to improve the appearance (visible knurl), or to create a frictional connection between a hub and a shaft. In contrast to splines and serrations, where the tooth shape and number of teeth are precisely defined, the outer diameter is the decisive criterion for knurling. The outer diameter is calculated according to the formula opposite. The preferred pitches according to DIN 82 are 0.5; 0.6; 0.8; 1.0; 1.2; 1.6 and 2.0 mm.

Tangential rolling system B10 for smoothing a spherical surface

Rolling system RR22-2 for rolling up a hose coupling

Thread cutting is a machining process in which material is cut out of the work-piece by means of chasers in order to produce a thread.

The cutting system moves in axial direction on the workpiece and cuts the thread. At least four chasers are provided with a pitch-free profile. Pitch and profile correspond to the thread profile. The thread is produced by the inclination of the chasers in the chaser holders. The feed corresponds to the thread pitch. The length of the thread is not limited by the tool. At the end of the thread, the opening mechanism of the tool is automatically activated. The tool releases the part and the tool returns in rapid succession. To machine the next workpiece, the tool is closed manually or by an automatic closing device.

Stationary Type:
The stationary Wagner thread cutting system is designed for use with rotating workpieces. This design is used, for example, on the turret of a lathe.

Rotary Type:
The Wagner thread cutting system in rotary design is designed for use with stationary workpieces. It is used, for example, on the centre sleeve of a machining unit or on the spindle of a slide unit.

Thread cutting can be used for a wide range of materials: free-cutting and structural steels, high-alloy steels, copper and aluminium alloys and non-ferrous metals. Threads can also be cut economically on materials that cannot be cold-formed, such as gunmetal, malleable iron and grey cast iron. Plastics are also possible. The material strength should not exceed 1300 N/ mm2.

The chasers have a parallel thread profile, i.e. threads of different diameters can be cut with the same thread pitch using a chaser set (e.g. M6, M8 × 1, M10 x 1 ...). However, depending on the diameter and the pitch angle, the appropriate chaser holders must be used.

The chasers are adapted to the machining task in size, throat and thread profile, that is, they are different:

With the multi-cutter turning systems, workpieces are reduced in diameter in the classic metalcutting process of turning. The cutting tool moves in axial direction on the workpiece and cuts the workpiece into shape with at least three inserts. The length of the cut workpiece is not limited by the tool. With the Wagner multi-cutter turning systems workpieces can be reduced in diameter up to 6 mm in one pass. The starting material can be round, square or hexagonal, drawn or rolled.
In addition all machinable materials can be machined.